Brace your ears: ÄÄNIAALTO III is coming to Kallio Stage

Brace your ears: ÄÄNIAALTO III is coming to Kallio Stage

Ääniaalto, a wide-ranging festival dedicated to all things sound and new media, featuring works, installations and performances by students at Aalto University’s Media Lab in parallel with artists in the new media scene, will take place next month at Aalto Studios’ Kallio Stage and Vapaan Taiteen Tila in Helsinki. The call for works is still open until 11.2.

Now in it’s third year, the student-produced event is expanding its horizons. “We are gathering striking oddities of sound and new media art,” says J. Camilo Sánchez Carranco, founding organizer of Ääniaalto. This edition hopes to begin conversations around robotic instruments, A.I. vs human control, the intersection between biology and sound, and custom instruments for audiovisual performance.

Another, broader aim of this third edition is to advance the platform toward an educational level. “We want to create not just a network between artists but also a culture where individuals outside the new media’s practices can learn,” according to Sánchez Carranco.

And with plans for two full days of enlightening workshops and talks in a more educational setting at Kallio Stage, the organizing group has certainly begun to establish this basis. At the same time, the performances, fixed media works, and installations that serve as Ääniaalto’s foundation are only growing. 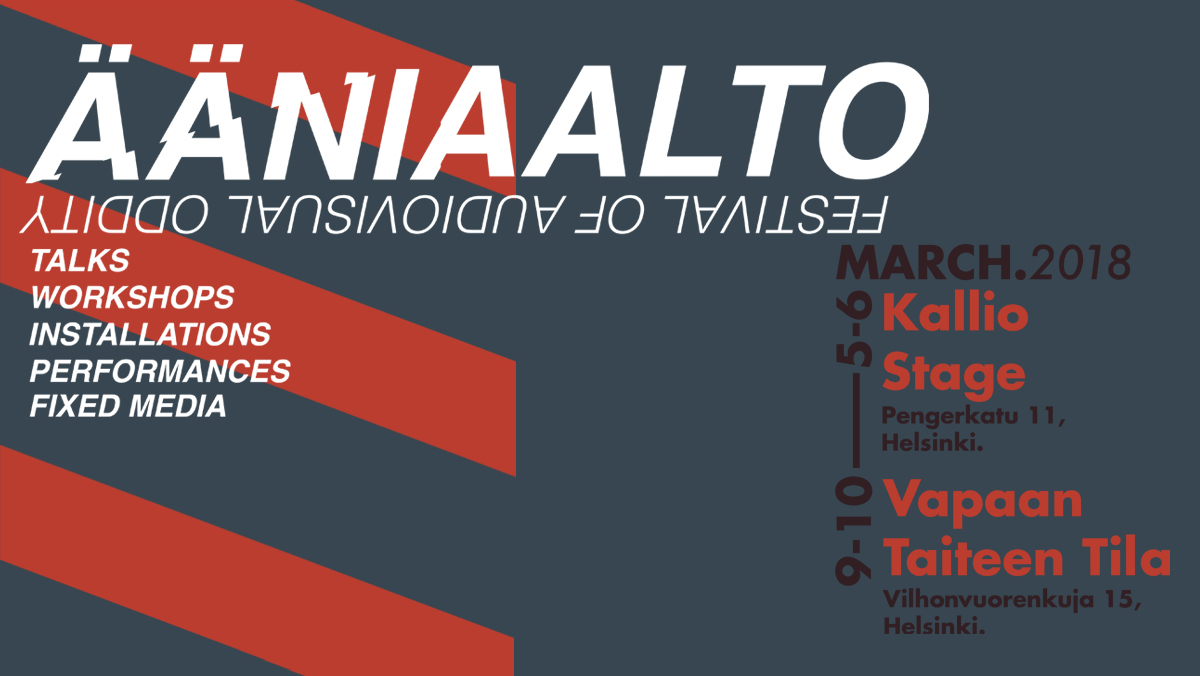 The festival has grown exponentially every year. First, it was two evenings of performances in a small upstairs space at the Media Lab, then the second edition last year a two-night festival filling Vapaan Taiteen Tila in Sornainen. This year, the festival grows even bigger, now a four-day extravaganza, expanding beyond performances and installations to include workshops, fixed media works and talks by artists and new media designers.

Submit work to the festival, attend, and learn more by visiting the event here.

What is Aalto Studios?
Aalto Studios is the media center of the future, where teaching, research and product development rise to the challenges of a rapidly evolving digital society.

Socio-Cultural Role of Technology in Digital Musical Interactions -symposium followed by a concert in Kallio Stage 15.11.